Pictures of people and places in my life.

Until I make uniformly small pictures that people can load in one page, I'll just have text with pictures linked here to open in another window. Sorry, no previews yet.

An old Senior pic of me.

Me and an old friend who isn't with us anymore. :(

Heres a pic of my friend Xhana and I all dressed up.

Here's what happens to me after a good mushroom hunt.

Here's some pics of friends and family:

A guy I've been friends with forever and his new wife. (well, new when this photo was taken I think.) I've known him so long it will still be years before I think of him being married as not new anymore.

My sister and brother in law.

Here's a pic of Mike impersonating a G-man at Inna's graduation party.

An old highschool buddy and our friend from France, Jereme and Yannick.

Here's a picture of my roomate Stan, who is also a model and his monkey. Being a model and willing subject, he helped me alot in learning human anatomy.

Nobody can escape Deva's piercing eyes.

The imitation playdoh cat Shadow. No other self respecting cat acts like playdoh in a humans arms!!

Although I don't have pics of most of them, here's some pics of online friends in no particular order:

Zerggirli and Warchild our rainy Hobbit Trail hike. Castle is looking sad in the rain, even though Mika was the one most affected by it.

The Old Man of Starcraft himself.

Muffingurl. Man, they have crazy lighting in Australia.

The other Stan, or Onegamewonder.

The mysterious Tammy doesn't want us to see her, but here's a pic of her daughter Alyssainstead.

Gerry. I don't really know this guy, but what the hell. :)

Here's a pic of a real hottie Justagirl. ;) Now are you happy?

Pictures from my trip to Bulgaria!

Rain isn't a trademark of Portland without reason.

After the rain a little green. 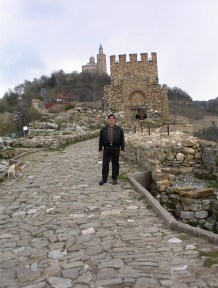